“SCHOOL OF VOLUNTEERS” in Pokrovsk 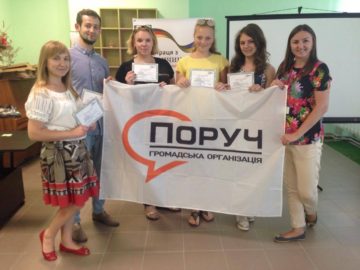 On June 26-27, in Pokrovsk, Donetsk region, volunteers held a training within the framework of the social project “School of Volunteers”, which was initiated and implemented by the NGO “Poruch”. The project aims to promote volunteering ideas, encourage citizens to participate in activities for community life, train agents for future changes and create a community of activists who would develop an effective dialogue between the community and government, participate in the implementation of social projects in the region. 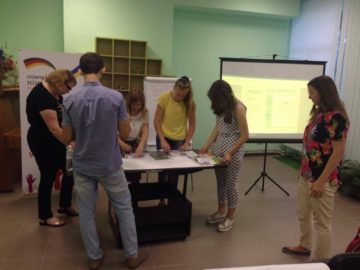 The two days of the “Volunteer Schools” were saturated and very productive.Participants, students from different schools and universities, local activists, internally displaced persons, parents actively participated in games, exercises and discussions organized by facilitators Oksana Melnyk and Marina Polischuk; With inspiration, worked on developing activities (projects) that could improve the current situation in Pokrovsk and nearby region.

The positive result of the “School” was that its participants understood the value of volunteers and the volunteer movement in general for building a civil society, once again we were convinced that changes begin with each of us, and for a good idea there will always be a team of like-minded people – and for this you need to make the first step and establish communication with them. This is confirmed by the fact that even during the training several ideas of social projects have appeared, which we hope will be implemented in the nearest future. In addition, the curiosity to the topics that were offered by the facilitators did not disappear even during coffee breaks and lunch breaks. The participants shared their experiences and dreams, asked about the experience in conducting events, and were supported by the representatives of the NGO “Poruch”, who became for participants not only as facilitators, but also reliable partners and inspirators.

We hope that active citizens who have visited the “School of Volunteers” will preserve the knowledge and inspiration with which they came out after the training, as well as share this enthusiasm with others, to improve their lives and community life.

Experts of the NGO "Poruch" at the Community Festival in Bakhmut

For donors’ attention! The base of medical institutions of Ukraine, where you can donate blood